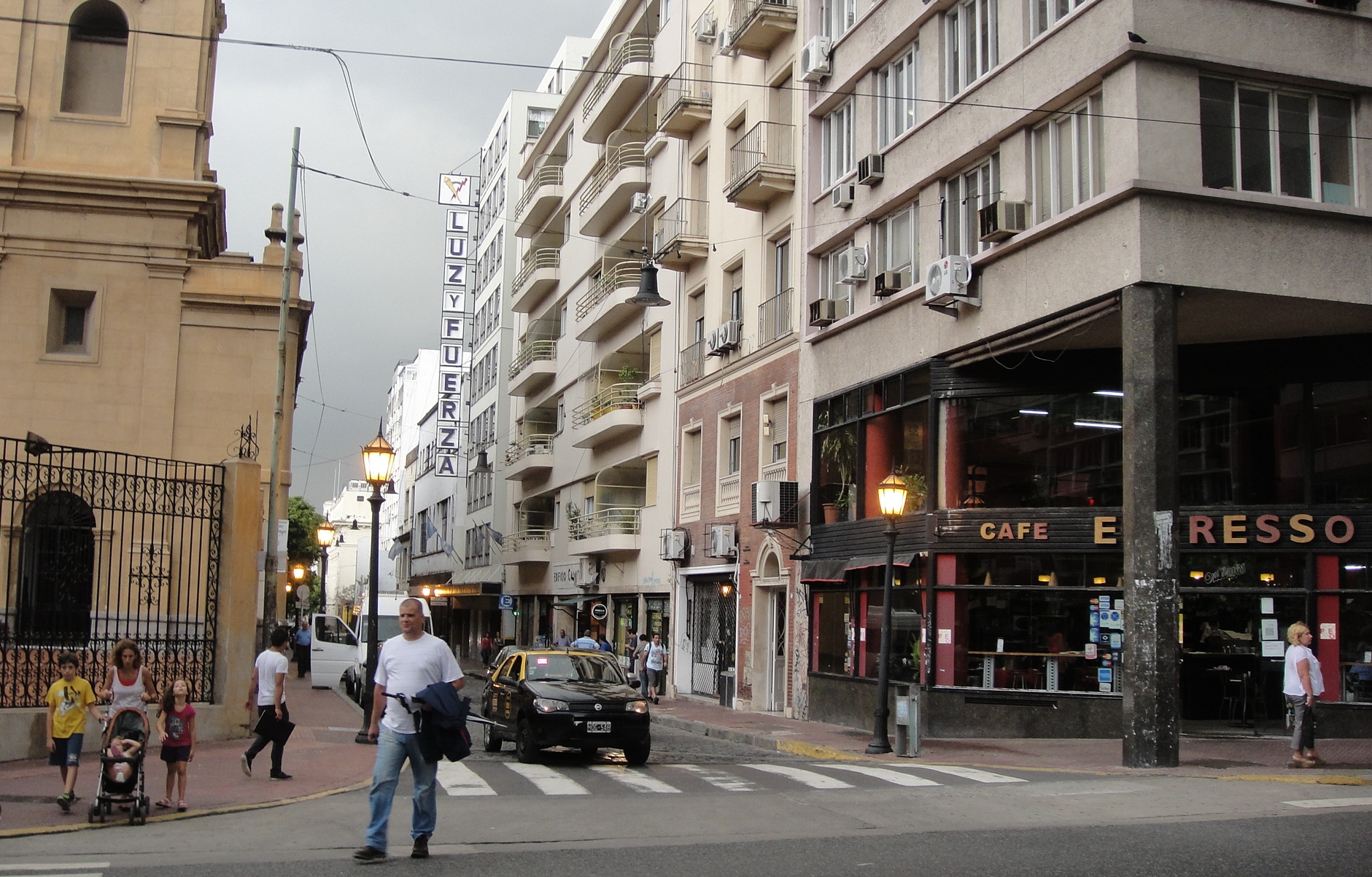 Today was my last full day in Buenos Aires and I had no plans. I was more comfortable in the city now than in those initial days in Buenos Aires. It was pouring with rain in the morning so I stayed in and catch up on some writing. Around midday the sun was out so I just decided to walk with no general direction in mind through San Telmo.

Beyond the obelisk towards Recoleta and back another route.

I always find the cambio / money exchange dealers every few meters in Florida quite funny.

I settled for a Mediterranean sandwich, cheese cake and lemon iced tea at Starbucks for lunch, I then headed for a nice souvenir shop to get myself a Buenos Aires magnet and some Yerba Mate (with the cup and straw to drink it from – if anyone at home wants to try this super-caffeinated communally shared hot drink, let me know).

There is quite a bit of graffiti and homeless people in the city.

The rain started again that afternoon so I went indoors and rested again until 10pm when I went out for dinner.

I passed by an outdoor restaurant with tango dancing.

It took me about 30 minutes to find a good restaurant as I wanted something other than pizza. I found a great restaurant that served me an assortment of breads with a pate as a starter, grilled salmon with wok vegetables with a cold drink, and tea with a croissant (total 159 pesos).

Returning at 1145pm (it was a 25 minute walk) I noticed a family going through the garbage bins looking for recyclable materials (many young daughters going through the trash). I’d seen this on a number of occasions.

The Argentinian economy is in a very bad condition and people are struggling. Those of us fortunate to have food, shelter, clothing and education must never forget how privileged we are.

After breakfast I finished pack my bag and headed out for lunch to Los Temenos for a slice of pizza and coke.

There empanadas looked good but they didn’t have any tuna or veg.

I then returned to collect my luggage and headed off to the airport with another guy that was also heading that way by taxi.

I arrived at the airport at 2pm. My flight was scheduled to depart at 6pm so I decided to kill some time using the free WiFi internet. A lady who recently resigned from Standard Bank (where I was working at) recognised me. Far out! After checking in I met another South African next at the boarding gates. He was a BCom student who spent 3 months in Salta with an Argentinian family on a home exchange programme. He shared some interesting insights on his experience, and his Spanish is really good.

On the flight back I sat next to an Argentinian technician who is coming to SA to do work at one of SA’s retail stores. We discussed the economy, the Argentinian diet, difference between SA/Argentinian work patterns, and where he is heading off for his holiday.

The flight would be 8.5 hours in total (with turbulence). I watched Elysium, wrote a little and caught a nap. At 8:15am I would be in Johannesburg, South Africa. Back home after an amazing 40 day adventure to Antarctica, Argentina and Chile.