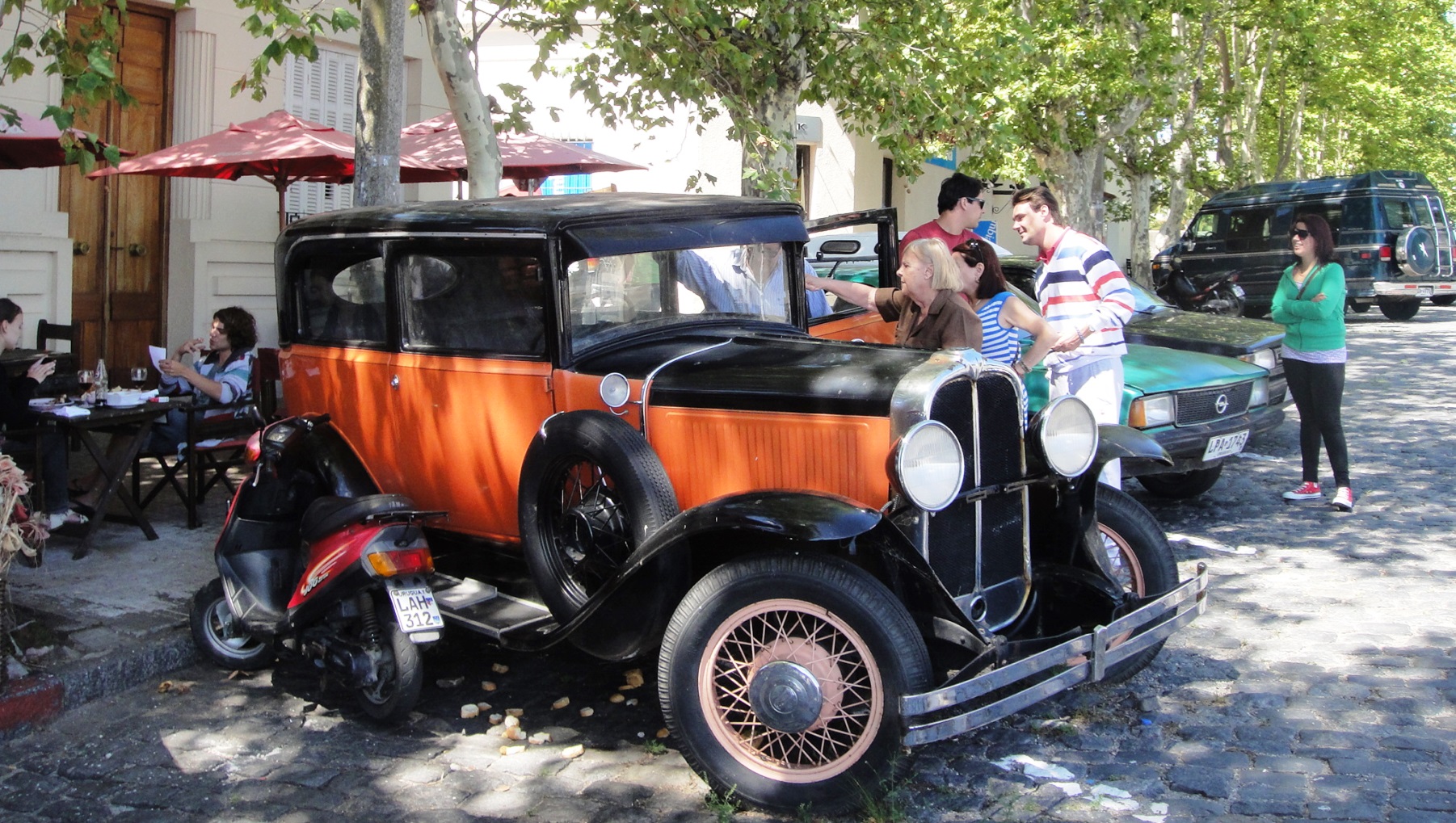 After breakfast and checking out from my accommodation (Florida Suites) in Buenos Aires I took a taxi to the Colonia Express port in Puerto Mendoza (La Boca).

The catamaran ride to Colonia takes about 1 hour. It’s quite a decent ride, but the boat can rock a little as it crosses the Rio de la Plata river at high speed.

Once I arrive at the Uruguayan port we just had to put our luggage through an X-Ray machine.  It seemed more like a formality rather than a thorough inspection. I walked over to the bus station next door and purchased a bus ticket to Montevideo which would depart in 2 hours and 20 minutes time (Cost was 248 pesos + 12 peso tax).

I then left my luggage in the bus station luggage store and had some time to explore Colonia Del Sacramento, a UNESCO World Heritage site.

I read some websites on Colonia just before arriving from people who had been there on a half day visit stating that Colonia is absolutely boring with nothing to do. I didn’t have time to get bored as I had less than 2 hours in the main area.

You can hire a golf cart near the bus station if you’d like to drive around town.

There is basically one main street lined with banks, money exchangers and restaurants. At the end of the street is the historic area with cobbled stoned streets, a lighthouse, fort and other historic buildings.

There is also a little “beach”, but instead of sea you have the Rio de la Plata river.

I wouldn’t swim in the river, and didn’t see anyone else swimming.

You may spot a few vintage cars in town.

Most visitors to Colonia are just expats from Buenos Aires who make the short journey to withdraw US Dollars from the Uruguayan ATM’s and take that back to Argentina where it is worth much more on the Blue Dollar market.

I had a problem in Colonia. None of my bank cards would allow me to withdraw Uruguayan pesos or US Dollars from the ATM’s (I tried 4 banks).  While people come here to stock up on dollars, I had to use some of my final US Dollars to get some Uruguayan pesos from the Cambio (money exchanger). My Credit Card was still working at POS devices but not everyone accepts it (taxi drivers, luggage storage, etc).

I then bought a spinach tart from a small café and headed back to the bus station to collect my bag. Unfortunately I couldn’t find any fridge magnet of Colonia in town or the bus station.

I then took the COT bus to Montevideo, passing through a flat landscape of farms. I was surprised that the bus had high speed internet available for free. Good enough for me to make Skype voice calls.

When we arrived at Montevideo Bus Terminal I did not expect that it would actually be within a huge shopping center.

I took a taxi to my accommodation in Pocitos. The taxi meter read 46 pesos so I handed the taxi driver a 50. He then said no it’s more (in Spanish) and proceeded to show me a chart with graphs and a table of prices. I don’t know how it works, and how it relates to the meter price so I just paid him the 130 pesos that he asked (R65) as I did read something on the internet about how confusing their taxi system can be.

It was about 8pm when I checked in (note, the clock was 1 hours ahead in Uruguay as they observe daylight time saving). I was hungry. I was tired. I went to my bed and slept. At 11:30 pm I awoke and asked the receptionist to recommend a good pizza place to me. She mentioned Valerio which is on 26 Marte Avenue. I found it about ten minutes later (thanks to walking directions on my Lumia 620 phone), got myself a seat, and stared at the menu.

After making sense of some of the terms by speaking to the waiter I ordered a “2 x 1 Mozzarella pizza with 2 toppings (olive and onion)”. They serve the pizza as 2 small squares sliced into four cubes each in Uruguay.