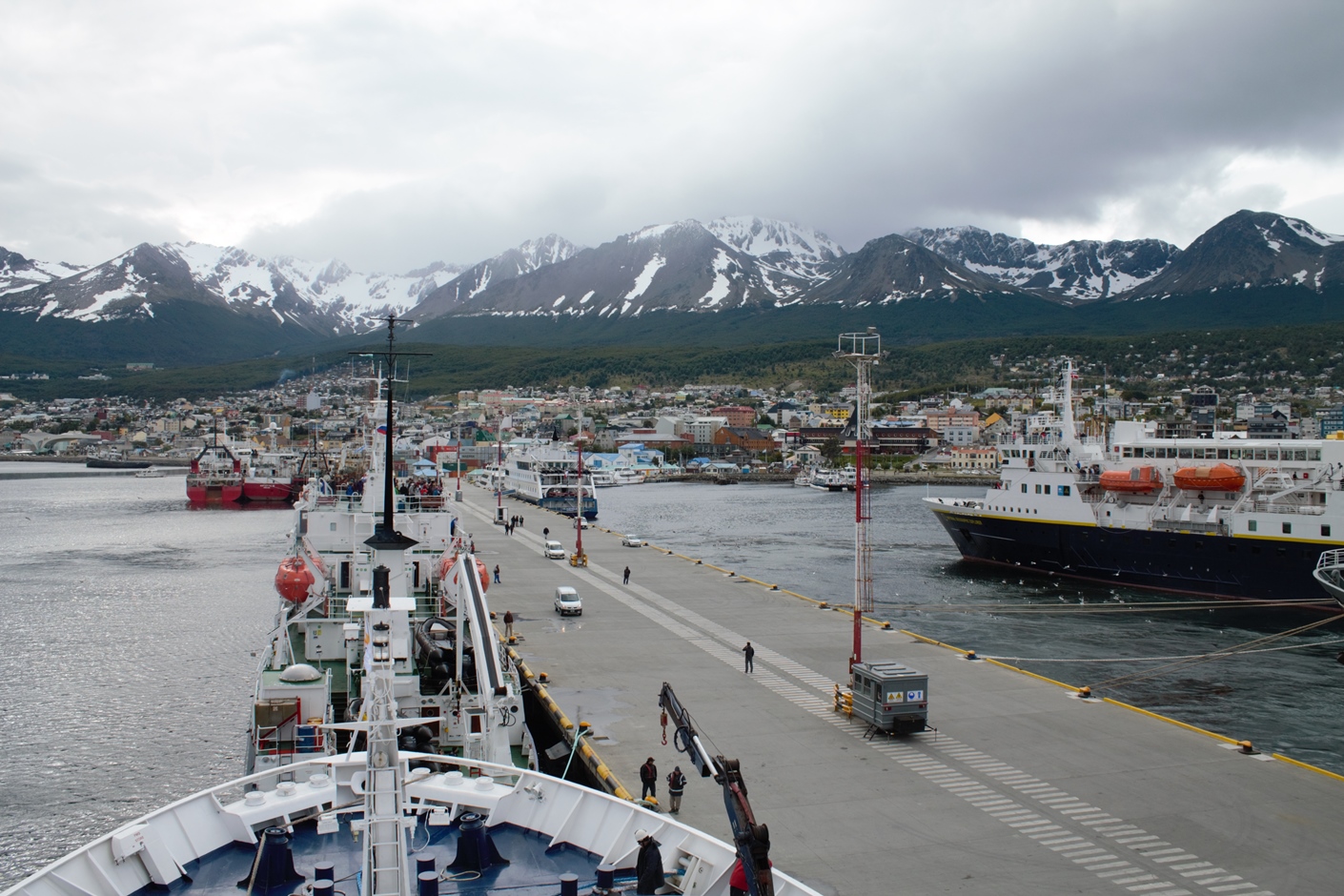 I arrived on board the ship that would get me from Ushuaia to Antarctica at 1630. The earliest boarding time was 1550 and I was supposed to take a bus from somewhere in town for the ship. I got to the only bus terminal in town that I knew at 1605 and there were no buses for the ship so I decided to head straight for the ship on foot (about 2 blocks away) via the passenger passport control. The passport control office asked to check my booking confirmation and let me walk onto the pier where the ship was docked.

Outside the ship I saw the gangway ladder extended to the pier but no officers seemed to be manning it or waiting outside, so I decided to just walk up the gangway directly onto deck 3 of the ship.

There I met 2 security officers who immediately directed me to the foyer behind them where room cards were being handed out in exchange for our passports. I felt as though I was the last person to board, even though boarding commenced less than 40 minutes ago. I left my bags in my cabin and noted that my roommate had already checked in and left his gear in the room (I paid for a twin share cabin and had no idea who I would be sharing with. The joys of backpacking and journeying to Antarctica…).

I headed for the Club Room on deck 4 where hot drinks and biscuits was being served and immediately met some interesting people. Once was a South African (originally from Norway) who flew solo on his on plane from Cape Town to Europe, North America, and then South America. He parked his plane about 100km out of Sao Paulo, Brazil. The other person was an interesting Dutch guy. We talked about what we did just before getting onto the ship and our plans thereafter.

We had to go to the main lounge for the welcome briefing and to receive some essential safety information. Everybody was told that the emergency drill would be commencing soon and what we need to do. Shortly afterwards the ships siren rang. I went to my cabin to collect my lifejacket and noticed that my roommate (who I still did not know) had collected his jacket already and left. I proceeded back to the Main lounge on Deck 5. This is the muster station for all guests. Passengers in odd numbered cabins sit on the port side chairs and even numbered cabins sit on the starboard side. We have our names ticked off a register and then await further instruction from the bridge.

After the emergency life drill I returned my lifejacket to my cabin and met my roommate – he was the Dutch guy I met in the Club room earlier on.

I then went above deck to watch the ship undock from Ushuaia and start sailing through the Beagle Channel towards the Drake Passage to Antarctica.

We departed at 6:15pm and were told to expect rough weather as we enter the Drake Passage after midnight.

At 7:30pm we then proceeded to dinner at the Dining Room – our first experience at the amazing 3 course gourmet dinners that they serve on board. I sat on a table that was a mix of guests and 2 expedition staff members (the shopkeeper and ornithologist). Compared to larger cruise ships I like the fact that the expedition staff and guests can socialise and share the same table.

I saw the pilot ship come in to collect the pilot but I could not see the pilot transfer with my own eyes from where I was standing. I held my hand out on the stern – starboard side of the ship in rocky water with high wind to get some footage.

They then announced that we can collect out waterproof parkas / life jackets. Every guest receives a jacket that they can take home. I tried on the medium sized jacket which seemed to fit but when I returned to my cabin and tried it on with 2 extra layers underneath it I decided to change the jacket for a large size.

I then chilled out with hot chocolate in the Club Room. The doctor was also there to hand out sea-sickness medication and provide advice to those in need.

As soon as we got on board the ship I saw people already had the patch on their ears for motion sickness (you need to take it 4 hours before sailing). I managed to see the pilot transfer to the pilot vessel before we exited the Beagle Channel and entered into the Drake Passage. As it got later it got quieter as people started heading to bed around midnight. I was just too psyched up and had my eyes fixed on the windows with a few other guests as the ship started swaying from side to side. I was heading to Antarctica and I wanted to experience every moment of it.

Midnight at the end of the Beagle Channel is not quite dark. Here is a view of the observation lounge standing at the bow (front) of the ship.

As a precaution for not taking any sea sickness meds I decided to have some chamomile tea which calms you a little (although I was in no need of it). When I finally did go to bed at around 2am I was surprised to see how empty the ship was – no guest or crew in sight; unlike larger cruise ships.

The wakeup call was at 07:30am and I was up immediately. I headed for the Club Room where early morning hot beverages and pastries were available before the buffet breakfast begins at 8am. I noticed that vomit bags were present on the stairwells and corridors. Breakfast on board is great. There are lots of options available at the buffet (eggs, cereal, yogurt, pancakes, fruits, baking, etc.) with an omelette of the day that you can order from the kitchen. The dining room was half full that morning. I guess quite a few people were suffering from motion sickness.

One of the benefits of heading to Antarctica on an expedition ship is that there will be lecture programmes by skilled expedition team members. The first lecture began at 9:30am from Fabrice the Ornithologist who spoke about “The seabirds of the Drake Passage and Antarctic Peninsula” that we can expect to see.

At 11am Shanti the Marione Biolgist gave her talk on the “Cetaceans of the Antarctic Summer”.

At 12pm I headed to the Observation Lounge on Deck 7 where they were introducing people to the Wellness Programme but once I realised that it was only yoga I left. I spent 6 weeks in physio a year earlier after trying yoga once and I’m not prepared to try it again – particularly on a rocking vessel on its way to giving me one of the most epic adventures of my life.

After buffet lunch at 1230pm I returned to my cabin for a little rest before joining Simon the onboard photography guide for his introduction to Antarctic Photography an understanding our cameras. His main tips was for us to:

I headed to my room to rest for a while. I don’t get motion sick but I do get a bit tired on a rocking boat if I’m sitting still or not eating anything.

At 4pm I headed for afternoon tea in the Club Room and played around with my camera taking into consideration Simon’s advice.

At 5pm all passengers had to attend a mandatory briefing where we were told about the landing guidelines that we need to follow, provided information about IAATO (International Association of Antarctic Tour Operators), Biosecurity (no food/seed/biological matter can be introduced to the continent and how to disinfect ourselves and gear before heading to shore and on each return to the ship), and how to ride safely on the zodiac (with the sailors handshake recommended when getting on or off).

I returned to my cabin for a little more rest afterwards and was on my way to the Captains Welcome Cocktail and Expedition Briefing at 6:30pm when a Code Blue Emergency on Deck 2 was declared. My cabin is on deck 3 so I saw the doctor and a number of crew members rushing downstairs.

They reshuffled the function and began with the Expedition Briefing as the captain was below deck with the injured crew member.

The captain then arrived and introduced us to his officers.

At 7:30pm I went for dinner to the Dining Room. Shane the expedition leader then interrupted to give us an update of what was to be expected for the next day. We were supposed to have our first shore landing in Half Moon Island the next day but the injured crew member requires a medical evacuation so instead we are heading towards King George Island which has an airstrip where the crew member can get a plane to Punta Arenas, Chile. This is the nature of expedition trips to Antarctica – there is no support nearby, if accidents happen, emergencies arise, the weather changes for the worse or an ice-field that can lock you in is approaching –you adapt your plans.

I headed to the ship library after evening to read up on King George Island and missed the talk by Sharon in the Club Room on “Myths and Legends of New Zealand”. These talks at night in the Club Room are light and entertaining.

There was also a competition for guests to participate in and I completed the form at reception. We had to guess when we would spot the first ice berg (above 5m in length). I said 5:30am on 31 December. Would I be correct?

Check my upcoming posts for more on this trip.

I traveled to Antarctica on the Ocean Diamond with Quark Expeditions from 29 December 2013 – 7 January 2014 and booked my trip with Sarah at Freestyle Adventure Travel – whom I highly recommend!